Sally McGuire and I are friends and avid photographers.  We jumped at the opportunity to visit Cuba for 7 days in April, 2015 with a Collette Tour.   Because of travel restrictions imposed by our government, this tour was allowed as a “people to people” cultural tour with the itinerary set by the Cuban government.  We were required by our US government to keep a daily journal of places we visited and interactions we had with Cuban people.

We took a chartered flight from Miami into Cienfuegos, Cuba where we spent three nights.  After nervously, but uneventfully, passing through customs at the airport we were in the forbidden country, Cuba!  It wasn't long before we began seeing American classic cars from the 50's cruising by.  These cars are often used as taxis. 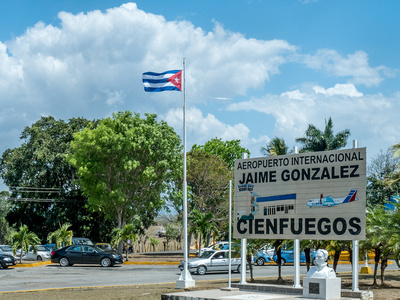 Jaime Gonzalez AirportEntry to airport at Cienfuegos and Cuban flag 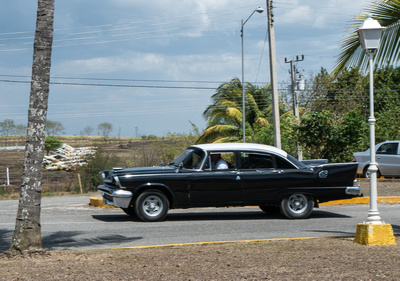 We boarded our coach for a short drive to the beautiful four-star Hotel Jagua.  We were enthralled by the sights around us.  The tropical countryside, humble dwellings, roadside produce stands, billboards with images of Fidel Castro and Che Guevara,  and roadways with people traveling by horse and cart, 50’s vintage automobiles, and bicycles as well as a few more modern modes of transportation.  We never saw heavy traffic, as only about 1/3 of Cubans have automobiles. 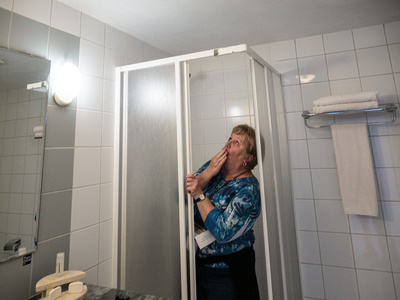 The front balcony looked out upon a gorgeous “palace” and the rear balcony had a beautiful view of the bay. 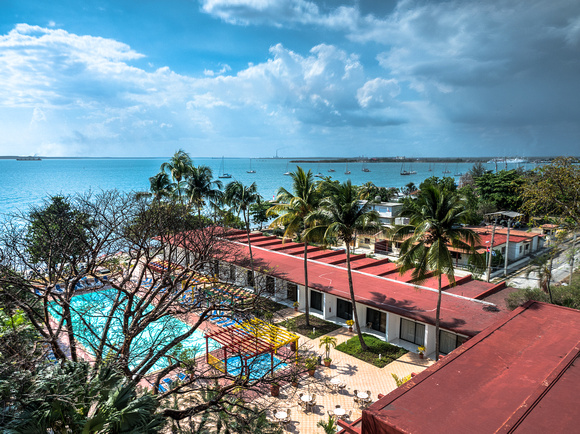 After checking into our hotel, we were taken to the square where we were treated to a wonderful vocal performance by the Cantores D Cienfuegos.

Afterward we had dinner at our first “Paladar”.  Paladars are usually family-owned and operated restaurants that are an alternative to the government-run restaurants.  We dined at Paladars many times and found them to trendy and up-scale with good food and excellent service.  And always beans and rice as a side dish!  And always live music!  I had my first of several Mojitos during this trip but Sally stuck to Pina Coladas. 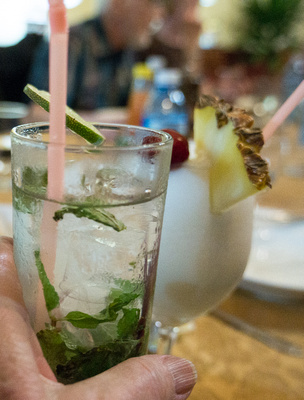 We heard bongo drums from the terrace dining area at our hotel well into the night.  Sally and I were inspired to try some dance steps on the open balcony by our room.  It was only later that we discovered most drinks were served as "virgins".  Rum was added only if you asked for it! 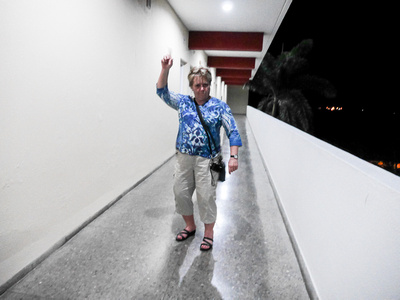 Our morning began with a visit to Botanical Gardens and a tour of a cigar factory.  Unfortunately no photos were allowed at the cigar factory where most of the process was manually performed by women.  We then had a walking tour of the town where we visited a barber shop and a state-run food market.  The market had a lot of empty spaces and not much selection of food items.  Cuban people receive between $20 and $30 per month (even professionals such as doctors) as well as coupons for food.  Food is very basic such rice, beans, flour, oil.  Meat is very expensive for average Cubans and they may eat meat only a couple of times per month.  A nearby private food market was more like one of our markets but items would be out of reach for most Cubans.

Sally and I were told that Cubans would usually be happy to pose for a “CUC”  (convertible peso used by tourists with a value of about $1).  This man was the first person I asked to pose for a picture.  He was happy to oblige as he fingered the coin I gave him.  We soon found many opportunities to take more portraits of Cubans who were happy to receive our CUCs. 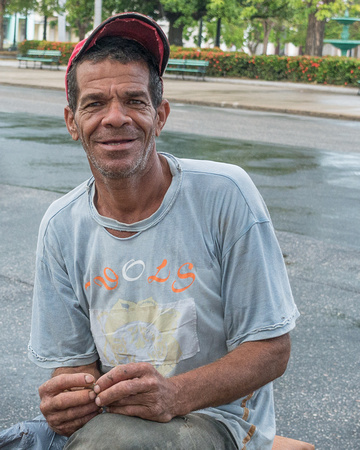 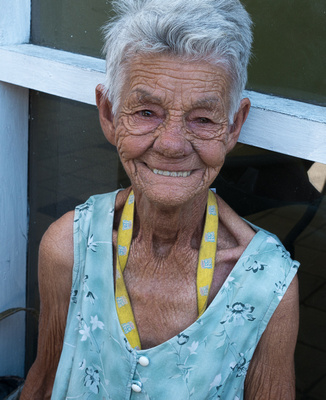 Cuban school children are neatly dressed in uniforms with scarves that indicate what grade they are in.   These youngsters were grinning at us as we passed in our motor coach.  Education is free and anyone can get a university education as long as they can pass necessary exams. 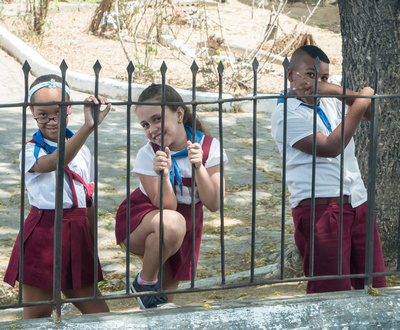 It was at a square in Cienfuegos that Sally and I had one of the most memorable experiences of the tour.  When I asked a Cuban couple if we could share their long bench, the woman smiled and immediately tried to share her snack from a paper bag.  The couple did not speak English and our Spanish was severely limited but we managed to communicate somehow.  We learned each other’s names and the woman, Luisa, let us know it was her birthday by singing part of the birthday song.  She indicated she was 61, and that she was wearing a new dress for her birthday.  Luisa motioned that she and Gregorio were married by placing two fingers together. A single finger showed that they had been married for one year.   Gregorio, insisted on giving us tomatoes and fruit and we shared a few coins and small gifts with them.  Sally ran back to the bus to get her Spanish/English dictionary and it was amusing as she and Luisa passed the dictionary and Sally’s reading glasses back and forth as they looked up words.  Sally left the dictionary and reading glasses with Luisa who is wearing them in one of these photos.   When Gregorio noticed I was using a cane, I motioned to my hip and said I was having surgery.  When we left he pointed to his hip and then to the sky and I interpreted that to mean he would pray for me.   When we left, it was hugs all around.  A true people-to-people experience! 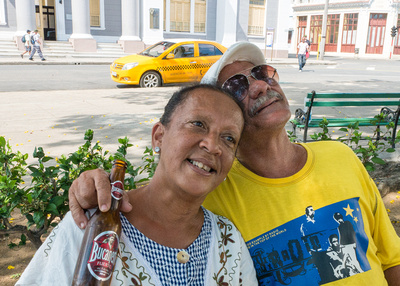 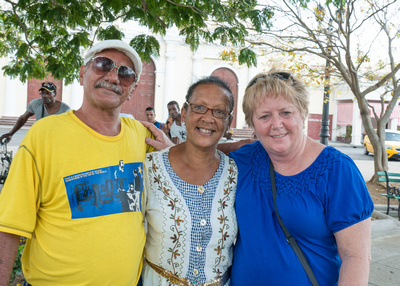 We dined on roast pig that evening on the terrace by our hotel.  As always, we enjoyed the live music with our meal. The next day we drove to Trinidad, a UNESCO World Heritage site, which has many well-maintained examples of beautiful Spanish Colonial architecture. 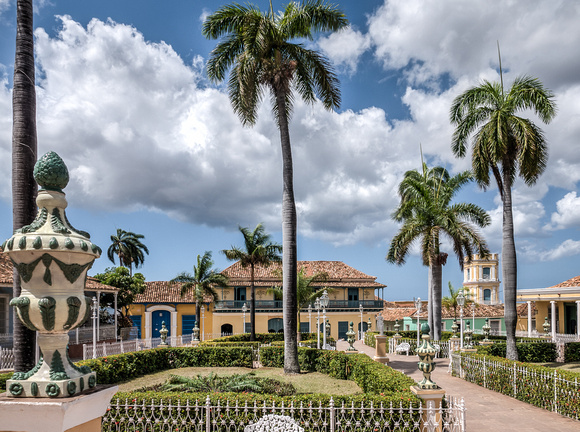 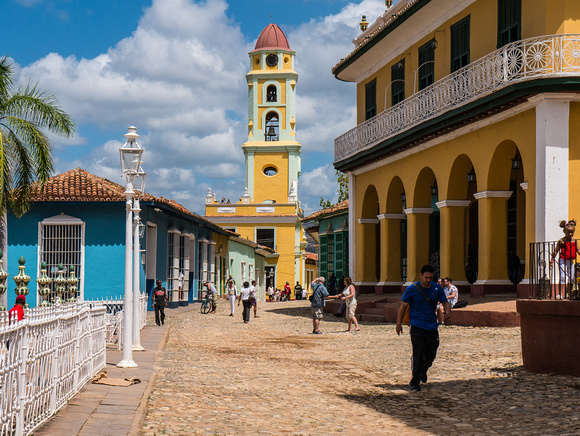